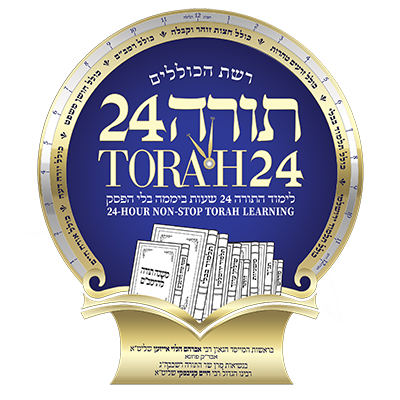 “No minute of day or night without the sound of Torah”

as done by The Ramchal, Ohr Hachaim Hakodosh and Reb Chaim of Volozhin

The Concept Behind the Support of Torah Learning

Supporting Torah learning is not merely giving to a good cause or doing a good deed, rather, it is more profound. Fundamentally, the Torah is the communication of the Will and Wisdom of Hashem to this world. The learning at “Torah-24” embodies the delving into the Torah and understanding the will of Hashem as expressed in the mitzvos and all the associated implications and nuances.

Further, Torah is the inheritance of the entire Jewish people – men, women and children. Unfortunately, too many people do not have the time or the skills to read and analyze Torah and all its wisdom, let alone delve into its depths and profundities. However, our tradition allows for our fellow Jews to be considered as equal partners of the Torah scholars’ study by supporting their efforts.

This was epitomized by the relationship between two of Yaakov Avinu’s 12 sons (later the tribes of Israel). Zevulun, a merchant, supported his brother Yissachar, who dedicated his time to study Torah, and was considered a full partner.

The Halacha
The Shulchan Aruch in Yoreh De’ah #246, addresses the efficacy of a Yissachar-Zevulun Pact and states: It is considered as if the one supporting the learning has also learned all the Torah studied. Thus, those who support the “Torah-24” Talmidei Chachomim, merit a portion in the Torah that they study.

A Yissachar-Zevulun Pact
Every person who financially supports scholars in their study of Torah, and does so in the form of a Yissachar-Zevulun partnership, acquires an equal share of that study. It is their mitzvah for this life and beyond.

Array of Learning
At “Torah-24”, due to the vast array of study: Talmud Bavli and Yerushalmi, Mishna, Rambam, Dalet Chelkei Shulcha Aruch, Zohar, Zeraim – Taharos, Medrash etc. – there are many sponsorship opportunities as identified below, as well as learning on particular days.

Occasion of a Simcha

To combine a simcha with the learning at “Torah-24”, renders it a seudas mitzvah (Rav Tzodok Hacohen), a spiritual dedication of a special day (Ben Ish Chai):

To Honor a Relative or Friend
Life milestones – birthday, new addition to the family etc.
Business success – associate the ‘material’ with the ‘spiritual’

For a Refuah Shleimah
Sadly, there are many cases of family and friends who are ill and are suffering. Aside from reciting Psalms and prayers, it is also customary to learn Torah on their behalf.

In Memorium
The study of Torah elevates the neshamah (soul) of the departed. Through “Torah-24”, the following opportunities are readily available:

A Unique Way to Honor a Beloved One
This opportunity has been a cherished way to honor family members and others. It has also proven to be a source of comfort for mourners to obtain such a zechus for their dear ones during the year of mourning.

Impact beyond the grave

Harav Chaim, the beloved talmid of the Vilna Gaon and the legendary Rosh Yeshiva of Volozhin had a Yissachar-Zevulun pact with a local shoemaker. The man was totally unlearned but, at the same time, dearly valued Torah learning. The shoemaker made a signed and sealed Yissachar-Zevulun pact with Rav Chaim, whereby the shoemaker would support Rav Chaim and defray his living costs. At the same time, he would have a full and bona fide stake in Rav Chaim’s learning – the mitzvah and the knowledge through to the World to Come.

One day the shoemaker passed away suddenly. During the shiva period, Rav Chaim faced a perplexing halachic question and researched high and low for a solution. That night the shoemaker appeared to him in a dream and gave him the full solution that he sought. Rav Chaim was amazed and commented, “So quickly, so quickly has he acquired the zchus and knowledge of the Torah that had been studied!”

For any of the sponsorships listed below, please click on the donation and you will be transferred to the Payments Information page

In depth and revisions